Sebastia in the news: how the ATS pro Terra Sancta project is slowly bringing tourists and pilgrims back to the town of John the Baptist | Pro Terra Sancta

Sebastia in the news: how the ATS pro Terra Sancta project is slowly bringing tourists and pilgrims back to the town of John the Baptist 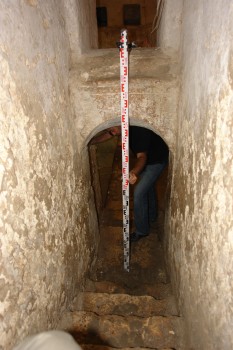 The ancient ruins on the hilltop above Sebastia, a short drive from Nablus, are a popular destination for Israeli tour buses, but few of the groups on them ever stay long enough to venture into the small town below. In fact, the Israeli Tourism Ministry leaflets distributed for free at the archaeological site actively discourage them, pointing out that as ‘area A’ the village, unlike the ‘area C’ remains, is off-limits to Israeli citizens under Israeli law.
They’re missing a lot, because Sebastia is a beautiful little village, full of picturesque houses and stunning views. Some of the ancient buildings right in the centre of the village have been turned into an absolutely gorgeous little guesthouse, which combines the tumbledown stones of Byzantine-era walls with the clean, modern lines of some very nicely-done modern design. The rooms are simple, classy and contemporary, and very comfortable. Some real thought has gone into the running of the guesthouse – the soap in the bathrooms is made from local olive oil, breakfast is a locally-sourced spread of jam and fresh fruit from the orchards, village olive oil and za’atar, taboun bread and hummus (all served on a sunny terrace, if the weather suits). For guests wanting half- or full-board, hot meals can be fetched from local restaurants, or there is a shop in the village and a kitchen you can use. And the staff are delightful.
The guesthouse is an initiative of the Mosaic Centre (a community tourism organisation based in Jericho), the Franciscan Terra Sancta, and Sebastia Municipality. Other parts of the project include a tourist information centre on the village square (which can also teach mosaic-making classes and sells original and replica mosaics), and hikes around the village to sights such as the magams on nearby hills and the old Ottoman railway station.

(…) But Sebastia’s residents and municipality want other tourists to venture beyond the main archaeological site and visit the village too. They hope that this will give visitors a richer and more complex view of the town’s history and society — and, of course, bring much-needed income. With this in mind, an Italian-funded project run in association with the municipality and the tourism-promoting Mosaic Center in Jericho has excavated and renovated some of the ancient buildings in the center of the Old City. It has uncovered significant new Crusader and Byzantine remains, including a spectacular mosaic and rehabilitated magnificent stone buildings to house a community center, a beautiful little guesthouse, and the visitor information center where I acquired the first of my leaflets.

The little town of Sebastia, near Nablus in the northern West Bank, was one a major city. Home to successive civilisations from its Canaanite founders to its modern-day Palestinian inhabitants (via Israelites, Crusaders and Alexander the Great, the name but a few) both the major archaeological site above the village and the historic centre of the town itself should be major cultural tourism resources.

But few visitors stay long in Sebastia. For many tourists, it’s a morning’s halt on a whistle-stop tour. Coaches pull into the parking lot at the archaeological site and disgorge their cargo of visitors, who pile back on again a few hours later after a quick tramp round the main ruins – the amphitheatre, Hellenic watchtowers, chapel of St John the Baptist and Israelite palaces.

Very few visitors stop off in the inhabited centre of Sebastia. That means they miss the picturesque houses of the village, the town square where the old men sit and play shesh-besh and drink coffee, and the imposing Crusader Church, turned centuries ago into the Mosque of Nabi Yahya, the Muslim name for St John the Baptist.

But a new community tourism project is hoping to change all that.

A joint project has brought together Italian aid funders with Sebastia Municipality and the Mosaic Centre, a Palestinian community tourism organisation. They aim to persuade visitors to stay for a longer look at Sebastia, giving them the opportunity to meet local people and find out about the town’s contemporary life as well as its ancient history.

The project began with a series of excavations in the heart of Sebastia, clearing centuries of occupation deposits from run-down buildings, some of which date back over a thousand years. According to Wala, one of the project workers, the excavations have brought to light major Byzantine, early Muslim and Crusader finds, including an important new mosaic.

But the project hasn’t stopped with uncovering old remains. The excavated buildings have been lovingly restored. One now serves as a community centre, with meeting rooms, a small library and computers which can all be used to train local people in new skills.

Another, on the main square itself, has become a tourist information centre, providing maps and books on Sebastia’s history and selling local products such as jam and soap. It’s also a mosaic workshop, producing individual hand-made designs for sale as souvenirs and offering mosaic-making lessons to visitors.

Perhaps the most significant development for Sebastia’s tourism is the new guesthouse. Formed of several small, ancient houses, beautifully restored and with modern fittings added, this is the first time that tourists have been able to stay overnight in Sebastia.

While a building boom has brought Ramallah it’s first 5 Star hotel from the international Movenpick chain and the Intercontinentals in Jericho and Bethlehem are reporting increased trade, small guesthouses which deliver local jobs and social benefits are on the up too.

In Beit Sahour the Arab Women’s Union guesthouse has been renovated and renamed El Beit, while new locally-run hostels and ’boutique hotels’ have also opened in Bethlehem and Jenin and another is planned for Hebron.

In Sebastia, some real ‘joined-up thinking’ has gone into the running of the new pension. The employees are all from Sebastia village. The soap in the bathrooms is made by local women from olive oil grown in Sebastia’s groves. And breakfast, served on a sunny terrace lined with flowers in terracotta pots, might include taboun bread still smoky from the nearby oven, zeit (olive oil) and za’atar (thyme) from the surrounding hills, jam made from figs or cherries from the village’s orchards, and fresh fruit grown only yards away.

Visitors wanting dinner might be directed to one of the local restaurants near the archaeological site at the top of the village, or traditional Palestinian meals can be brought down to the guesthouse.

“We want people who come here to see the best of what Sebastia has to offer,” says Ramsi, one of the staff at the guesthouse. He smiles broadly as he serves breakfast, obviously thrilled to be able to show off the riches his village produces.

And, says Wala back at the information centre, the project won’t stop here. More rooms are being added to the guesthouse so that it can accommodate groups of up to 14 people and a new hiking trail around the village is planned.

It will, she says, allow guided tours or independent hikers following specially-prepared maps to discover sites in the hills around Sebastia, including several maqams (small tombs or shrines to Muslim saints) and the disused Ottoman railway station which once served the area, and to join in with village activities such as making traditional bread.

“We want to promote a wider appreciation of Sebastia’s history,” says Wala. “People should come to see the Roman and Samaritan ruins, but there are lots of other things to see as well, and opportunities to meet local people as well as looking at ruins.”

Background on Sabastiya in the Holy Land

The origin of the name of the modern day village of Sabastiya is the Herodian city of Sebaste, founded in 25 BC by Herod the Great on the site of anceint Samaria. Herod the Great, was awarded the city in 30 BC by the Roman Emperor Augustus, and built a temple dedicated to Augustus, a stadium, a theatre and refortified the city with larger walls. The large site includes a number of fascinating finds from several periods including the Basilica and Forum, the Theatre, the defensive Tower from the Hellenistic period, the Temple of Augustus, the Colomned Street, the ancient City wall and Gates, the Church of the Discover and teh Stadium.

(…) Relative to the other sites in the Holy Land, Sabastiya is not nearly as developed as other sites in the Holy Land, yet it does offer the visitor a very interesting glimpse into ancient civilization and the sophisticated development generally associated with Herod the Great. The site is currently in “Area C” in the Palestinian Territories which means it is under the control of the Israeli Authorities but is open to both Palestinians and Israelis. At the present time there is no entrance fee either.

The town of Sebastiya is worthy of a stroll and offers a cute little mosaic studio where visitors can learn the art of mosaic making. A small guesthouse, called “The Guesthouse” is also available for travelers seeking to stay over in this village.

Lunch – For those interested in authenti Palestinian food, just outside of Sabastiya there is a restaurant called the Holy Land Sun, thatalong with kebab, middle eastern salads and other entres,  served some of the best Kunafa delicacies in the area.

Location – Road 60 (open to both Israelis and Palestinians) is the main thoroughfare that intersects with the access road into Sabastiya, north of Nablus.