The Breviary pro Terra Sancta right on your BlackBerry 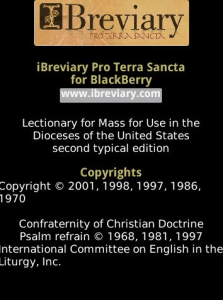 Thanks to the collaboration between ATS pro Terra Sancta and Father Paolo Padrini, inventor of the Ibreviary – the convenient application for praying on mobile devices that has become all the rage in Italy and the world among both laypeople and priests – it’s becoming easier all the time to stay close to the Holy Land and the Middle Eastern Christian world.

IBreviary, the convenient Catholic application devised by Father Paolo Padrini that allows one to pray on all mobile devices and that in recent months has become the rage in Italy and throughout the world among both laypeople and clerics, is now also available on the BlackBerry platform.

Ibreviary “Pro Terra Sancta” is a Catholic and Christian application that puts the traditional Breviary prayer on BlackBerry. The Breviary is the official prayer of all the Catholic faithful, and offers the possibility of meditating on the biblical Psalms; the Breviary offers a space for reflection, prayer and meditation.

The application, already available on the iPhone, Android and iPad platforms, has been almost completely reformulated, thanks above all to the partnership with the Custody of the Holy Land and the Association ATS pro Terra Sancta.

The application offers the possibility to pray while on the move with:

– a Breviary in 5 languages (Italian, Spanish, English, French and Italian)

– a complete Missal in each language

– the texts of the daily Missal of the Vetus Ordo

– the principal Catholic prayers and rituals for the sacraments

In the coming months a new version of iBreviary will be released for iPhone and iPad.

The Holy Land on Iphone and Ipad

Support the Holy Sites and the Christian presence in the Holy Land!

The message of Benedict XVI during the Angelus first year.