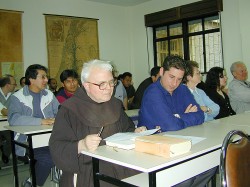 The Franciscans of the Custody have been in the Holy Land since the passage of St. Francis in 1219. Since then, the Friars worked to guard, discover and explain the Holy Sites. A longtime friendship stands between the CRSM Foundation and the Custody of the Holy Land.

The custody of the Holy Land is the main actor of important interventions and the Foundation has been supporting for quite some years now two of theirs important projects.

A project to restore and enlarge the library of the Studium Biblicum Franciscanum in Jerusalem.
The Studium Biblicum Franciscanum (SBF) is an academic institution for research and scientific teaching of the Holy Writ and archaeology in the Bible countries. It was created by the Custody of the Holy Land in 1901 and has been working no-stop since 1924 in Via Dolorosa inside the Monastery of the Flagellation. The Holy See made it Faculty of Bible Science and Archaeology in 2001 under the Pontifical “Antonianum” University of Rome and offers 2 specialization courses: Master and PhD.
The SBF carries out Bible research under linguistic, historic, exegetic, theological and environmental aspects.

It focuses also on Bible archaeology, in particular the rediscovery of the Holy Sites in the New Testament and the primitive Church in the Holy Land and the Middle East.

The SBF issues the academic degrees of Master and Phd in Bible Sicence and Arcaheology, issues a higher diploma in Bible-oriental sciences and Archaeology and a diploma in Bible training. It organizes seminars, study days, Bible updating courses and training for the tour leaders of pilgrimages to the Holy Land.
Next to the SBF is the Museum where the most important findings of the archaeological excavations conducted by the SBF are on display.

With a didactic structure for students and pilgrims, its halls present the excavations in Nazareth, Capernaum and the Dominus Flevit, the fortresses from Herodion and Macheronte and of the monasteries of Jude’s desert.

The SBF has a specialized library open to visitors with about 50000 volumes and 420 magazines. The main sectors are: archaeology, Bible studies, patristic, Judaism, Antique Orient and Holy Land itineraries.

The main objective of the project is the enlargement and the restoration of the SBF library.. Specifically, what is needed is:

A project for the evangelic town of Magdala
The project aims at creating a series of activities to preserve, highlight and make available the important historical/archaeological area of Magdala. The ultimate aims of the projects are conservation, restoration and safety of the site to give this extraordinary heritage back to the collectivity.

Magdala, birth town of Maria Magdalena, according to topography, should be Magadan, an anonymous place mentioned in the Gospels in regard with the second multiplication of bread and the teaching of Jesus about the signs of time. The Semitic name “Migdal nunaja” (Tower of fish) or “tarichea” in Greek points probably to the main city activity, favoured by its superb location on the western shore of Lake Tiberias.

The town was conquered by the Romans during the first anti Roman revolt (65 a.C.) after the siege by sea led by General Titus, where 6000 rebels died.

During the spread of Christianity, it was visited by pilgrims from Nazareth to Capernaeum, or from Capernaeum to Jerusalem, who cherished the birth place or the house of Maria from Magdala in a magnificent church taken care by a community of monks.

In the five years between 1971 and 1975 a vast archaeological mission conducted by Franciscans V. Corbo and S. Loffreda from the Studium Biblicum Franciscanum of Jerusalem brought to light a wide portion of an urban settlement with its buildings, its splendidly mosaic decorated villas, the paved streets, a vaulted square and a precious “mini-synagogue” from Jesus’times. The excavations discovered also the vast monastery quoted by the pilgrims, with some floors paved with refined mosaic, but there are still no traces of the church “still beautiful and not destroyed, but fortified (or converted into stables – according to a manuscript) (Ricoldo of Monte Croce) in XIII cent.
30 years after the excavations by Corbo-Loffreda, a recent cleaning-up (2007-2007) have brought out all the walls that now require urgent restoration and consolidation; thus, an architectural study and a detailed mapping were launched to prepare a proper conservative project of intervention.
In this respect, it is highly necessary to strip out and restore all the existing mosaic floors then to be mounted on adequate structures and protected against atmospheric agents. A new archaeological inspection enabled defining the urban aspect of Magdala in the Roman and late Roman period. New living quarters are coming back to light, together with rich domestic tools.

With the completion of new archaeological excavations and the adequate consolidation of the structures, a tour path could be created among the ruins to better explain the daily life of the city at Jesus’times.