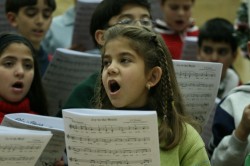 “MOM”, or Magnificat Open Music: the teachers and pupils of the Magnificat Institute of Jerusalem will be playing together in concerts on the first four Tuesdays of May at the Convent of St. Saviour at 6 p.m. (in the Immaculata Hall on 3rd and 20th May, in the church of St. Saviour on 17th and 24th May).

This new initiative has come into being as the first of a long series, as shown by the number “1” placed on the logo which has been specially designed for the event. Instead of teachers and pupils performing in separate concerts, the idea has been that the educational and artistic values would greatly benefit from this “joint” experience. In addition, with this recipe, the MOM becomes a visiting card for the Custody of the Holy Land’s school of music, which is opening up to the outside to become better known (as suggested by the word “Open”).

The communication has been written in all the main languages spoken at the Magnificat, i.e. Arabic, English, Hebrew, Russian and Italian, in order to start to gradually build up an audience of aficionados or friends of the school. The invitations in Italian and English are also addressed to pilgrims, who this way will be able to get to know one of the activities of the Custody of the Holy Land as they relax after the efforts of the day, listening to good music.

Some odd facts and figures: 49 performers, teachers and pupils, will present 55 pieces; we will be able to attend the “classic” debut of the newborn “Magnificat Spring String Orchestra” (after its first “light” appearance at the 7th Magic Lamp with music for children); together with important and very famous pieces such as Schubert’s “Trout Quintet” and many other pieces, there are some rare pieces, such as those for piano six and eight hands; lastly, the final concert of 24th May is actually…. a rosary: a mystery of the rosary sung from beginning to end, with about a “decade” of Ave Marias by different composers, Our Fathers and Queen of Heaven prayers by the Yasmeen Choir and the Magnificat Choir of the Custody of the Holy Land, conducted by Hania Soudah Sabbara with Father Armando Pierucci accompanying them at the organ.

The “logo”, i.e. the symbol of the event, represents two angels (one singing and the other playing the flute) surrounding MOM – Magnificat Open Music, where the “O” is replaced by the logo of the school, an Arab lute with a sound board that looks like an “O”. The abbreviation “MOM” lends itself to a pun, which is also present on the poster, where a pupil of the school says “I love mom”: which here can mean both “mom” in the sense of “mother” and “Magnificat Open Music”. The hope is that this new initiative – which in the future can cover a longer period of time- meets the favour of music lovers and lovers of the Holy Land.