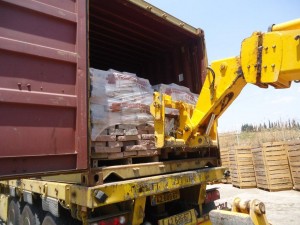 The unloading of the last seven containers of porphyry paving stones coming from the Trentino region in Italy, provided through a donation from the Province of Trento and with the participation of the Consortium of Stone Quarriers and Layers of Albiano (in the Province of Trent), was completed during the torrid heat of August.

The 17 containers of porphyry are now on the square in front of the convent at Capernaum, waiting for the works to lay them that will begin in November. They will be used for the new pavement within the renovated archaeological area which will allow visitors and pilgrims to enter the archaeological remains of the city of Jesus.

The Capernaum Project, promoted by ATS pro Terra Sancta, is part of a general cultural program launched by the Custody of the Holy Land aimed at promoting a documented knowledge of the history of Christianity in the Holy Land as well as providing information on the Franciscan presence and the works currently being carried out by the Custody at the Holy Places.