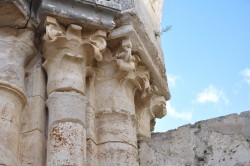 An almost chance occurrence, resulting from an Internet search: that is how Morena Tramonti, a young Italian archaeologist, discovered the existence of the “Sebastia” project, supported by ATS pro Terra Sancta, and left for the Holy Land to dedicate several months to the activities that have been developed in recent years in the Palestinian village of Sebastia.

How did you learn about the Sebastia project and what made you decide to participate?

I learned about the project by means of an Internet search. I wanted to find something that would allow me to employ my professional skills in an socially-useful activity. This is because archaeological employment in Italy at the present time isn’t very satisfying from the point of view of social utility, in the sense that investing in our cultural heritage is at the moment the least of our preoccupations. I started a simple search for archaeology and development, and between agricultural projects in South America and others far beyond my capacities, I came across the Sebastia project of ATS pro Terra Sancta.
What types of thing are you doing in Sebastia?

I am a specialist in medieval archaeology, with a thesis in the archaeology of architecture. In Sebastia, during a period of recovery and rehabilitation of some buildings in the historic center of the village, next to the Crusader basilica of St. John the Baptist, a small Crusader religious fortification turned up.  It had been greatly modified in later periods but was still well preserved. The buildings were to be used as a youth center, but once their nature was understood, the people in charge of the project, the archaeologist Father Michele Piccirillo, Doctor Carla Benelli and the architect Osama Hamdan decided to pursue a restoration that would enhance the site as it was. What I have done so far in my two months in Sebastia is to study the structures and building techniques from an archaeological point of view, and to seek out comparisons in the area, in order to better understand the initial structures and how and when they were transformed into their current form.
From an archaeological point of view, is Sebastia how you imagined it would be?

I would have to say no, I wasn’t expecting a site of such importance. I was aware of what had been published on the archaeological excavations in Sebastia and on the Crusader cathedral, but I had no idea of the historical importance of the buildings that had been recovered, which is remarkable. I hope that we can make advances in the research, because the things that are being preserved are extremely interesting. That’s as far as the project is concerned. I had read enough beforehand to know about what was being done in Sebastia, in terms of the activities, the restorations and the projects, but before I got here I had not begun to understand what sort of area this was from the sociopolitical point of view, nor had I understood its real importance. I believe that this is a rare case of preservation and enhancement in a territory that has literally been massacred. From a social utility point of view, I think this also makes it unique.

What’s it like to live in such a small village, isolated from the large urban centers?

In general relaxing, village life is slow and the people have the time to be together, to keep each other up to date. One enters into a very narrow dimension of familiarity, in which one doesn’t feel isolated at all. From the beginning they were very welcoming and made me feel part of the community. And with such a welcoming attitude that the comforts of city life have become of secondary importance. In my free time I have learned lots of things: to cook falafel and humus, to make small mosaics, I have also taken some Arabic lessons.

How are the relations with the inhabitants of the village, both in terms of your work and leisure activities?

From the very beginning they have been available, and also patient. They have taught me lots of things about their area from an architectural point of view, and they have always been very helpful when I have needed their assistance. For the rest of the time they have made me feel at home, protected and even somewhat pampered, and despite the difficulties (I don’t speak a word of Arabic) and the cultural differences, I have never felt myself to be a stranger here. They are very communicative people who want to make themselves known and to explain their point of view, their beliefs, their customs.  One of their greatest qualities is their sense of humor, their smile, their like of joking, and their carefree nature. For me it has been very instructive from a human point of view.
How does it seem to you that the project is being perceived by the local population?

I think that the village is divided into two parts on this question: those who believe in the project, who have expressed an interest to participate and to become involved in it, and on the other hand those who don’t really have any idea of what it’s about. Life in the village at times is immobile, and my impression is that despite being very small and with only about 3,000 inhabitants, many remain in the dark. But I think that this is largely a function of a somewhat unconcerned attitude, and not in any way a reflection on the project itself. In contrast, those who believe in the project are completely involved in it, they have understood its importance and will do whatever is necessary so that the project can go forward. I don’t think that anyone is really against the project, as its impact on the village can only be positive, and I imagine that even the most conservative residents don’t have anything against a development of this type.
What is, in your view, the tourist potential of Sebastia, taking into account the archaeological resources and the works that have been carried out in the village?

I think that it is are very high, certainly it would be in an area with fewer complications. From the archaeological point of view there are still a lot of things to be brought to light, we’re talking about impressive structures that could be put to other uses after a good restoration, in view of the high state of preservation in which they are found. The results of the project so far exceed all expectations, in view of the many difficulties. But the foundations are solid, there is no lack of will and enthusiasm, there are high skill levels at play. The large number of people involved, both as participants and supporters, are determined to continue along this line. The tourists with whom I have had the occasion to exchange a few words have all been very pleased with Sebastia, and there are some who return for the pleasure of passing a day in a place that is truly beautiful, in this hard-working and genuine atmosphere that gives hope. It is important for people to understand this important reality, that tourism is a powerful means of communication. My hope is that the Sebastia project will continue and that it will infect the area with enthusiasm, that it will be a sort of renaissance, undoubtedly a slow one but legitimate nonetheless.

Other news from the “Sebastia” project (in chronological order):

John the Baptist and the sites of memory in the Holy Land: an exclusive video production (November 2010)

More information on the “Sebastia” project

These important results would not be possible without your help. Our projects in the Holy Land are also yours! Please continue to support us with your proposals, your contacts and your resources.

Your contribution can be made online, via bank transfer or through the post. For further information click on:

A Musical Christmas: Huge success for the Magnificat’s Christmas concert