Volunteer commitment in The Custody of the Holy Land libraries: the account of Alessandro, a volunteer in Jerusalem | Pro Terra Sancta

Volunteer commitment in The Custody of the Holy Land libraries: the account of Alessandro, a volunteer in Jerusalem 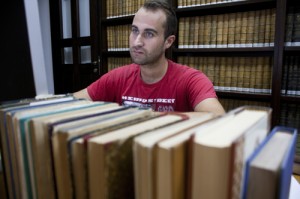 Having reached their third month in the Holy Land, the young Italian men and women committed to a year of Civil Service thanks to an accord between ATS pro Terra Sancta and the University of Bari recount their experiences, the activities completed and their impressions of life in Jerusalem.

This is the account of 25 year old Alessandro, who specializes in modern philology, and is working on a cataloging project of the ancient collections of the Saint Salvador of Jerusalem Library:

“These first three months in Jerusalem, from a strictly professional point of view, have been committed to the inspection of and organization of ancient editions containing texts of itineraries in the Holy Land, kept in the Saint Salvador Library and the Flagellation Library. Next began the meticulous cataloging, which is still going on, of those ancient editions according to a bibliological criteria aimed at detecting every shred of material evidence of the exemplary forms of the editions in order to fully improve the collection. Simultaneously began the designing of the digital catalogue that will house the bibliographic files of the editions from the ancient collections of the Itinera ad Loca Sancta (Path to the Holy Land) and the records, in Short Title format, of the contemporary editions of itineraries kept in the Custody of the Holy Land Library.

The first impact of the city of Jerusalem was very significant, in that our arrival happened to occur right as Easter celebrations were beginning, in which we were fully immersed, thanks also to our participation as members of the choir of the Magnificat of Jerusalem. Jerusalem is a city full of contradictions that conjures questions in every alleyway, alleyways in which one can see Arab children pop out who run screaming after one another, followed by Orthodox Jews who walk hopping to avoid contaminating themselves, and by solemn processions of different denominations on their way to the Sepulchre.

On the other side of the wall, mere meters away, reality changes completely: the European cars of the New City are substituted by beat-up carts, rusted sheets of metal pile up alongside the dirt roads to cover the crumbling walls of the numerous little shops along them from which women exit and enter who, covered by veils, hide beautiful profiles. Bethlehem, the city of Christ’s birth, mere minutes from Jerusalem by car, is an Arab city.

Tel Aviv can seem, at first glance, free from the complexities of the Holy City: in fact it presents itself as perfectly western, luxurious skyscrapers tower over golden beaches where the young crowd, girls and boys, who appear to have nothing to do with their peers of Mea Shearim. But, the image of the façade soon gives way to the state of degradation in many zones, where enormous masses of African immigrants drag themselves along the streets, jobless, dejected, almost a Conradian image, between the park thickets.

Much remains to be seen, I hope that the months remaining can bring new discoveries and new understandings, up until now many questions have been raised, some open, others with tentative answers that will certainly be brought up again in discussion, still walking the same narrow roads of the Ancient City, crossing new and as of yet unknown streets.”

For more informations about the project “Books, Bridges of Peace”, click here.