Christmas in Bethlehem. The streets of the city. | Pro Terra Sancta 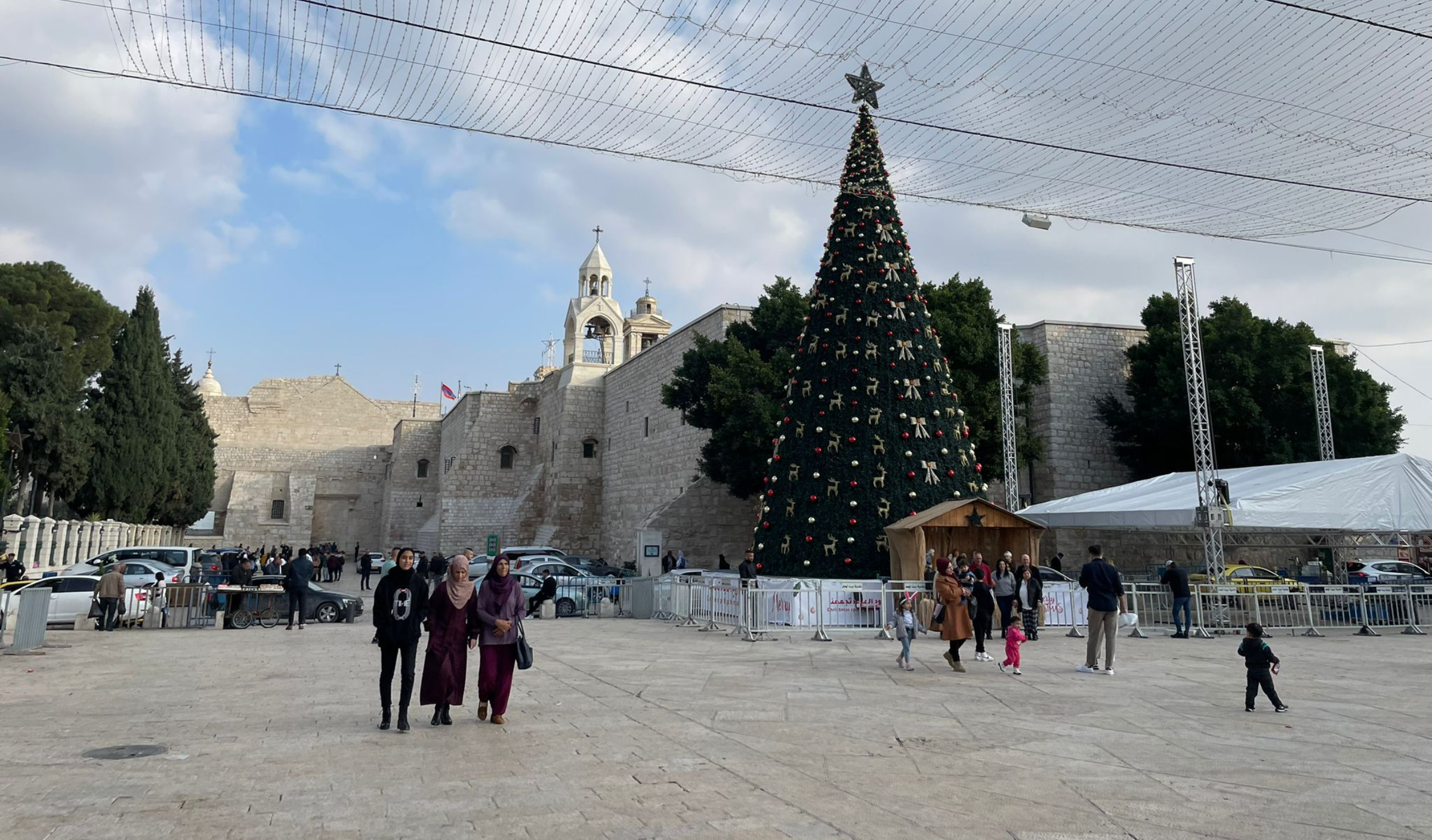 THE CHRISTMAS OF BETHLEHEM. A unique journey through the streets and works of the city of Jesus.

“Joseph and Mary are united by a single imperative: ‘Do not be afraid!’ They are united by a single mission: to collaborate with God so that salvation can be introduced into the history of Israel and humanity through Jesus”. These are the words of the Custos of the Holy Land and president of the Pro Terra Sancta Association, Friar Francesco Patton, on the occasion of the Fourth Sunday of Advent. The salvation he speaks of is made possible by the birth of Christ in a small Palestinian town more than 2,000 years ago. Bethlehem, the house of bread in Hebrew and the house of meat in Arabic, is the birthplace of King David, and until 1947 was largely Christian.

On the occasion of Christmas, we at Pro Terra Sancta in Bethlehem wish to take you along the streets of this city so loved by the faithful who have been coming on pilgrimage to the Holy Land for centuries.

A few steps from Checkpoint 300 and the wall that divides Israel from the West Bank is the first of three large refugee camps in Bethlehem. The camp is called Aida and was founded by UNRWA in 1950 to accommodate refugees from mainly Jerusalem and Hebron. In the heart of this camp we pass to greet Sister Luisa, the courageous director of the kindergarten whom we introduced to you two weeks ago . Today it is close to 20 ° in Bethlehem and in fact we see the children still playing outdoors! “It usually rains here every Christmas. He stops only when the Patriarch passes! We’ll see what happens this year,” a resident of Aida tells us with a smile.

We leave the wall behind and continue along Manger Street. Since the beginning of the month, the Arab city gives us a festive atmosphere thanks to the numerous illuminations scattered along the streets. We note with pleasure that tourists have also returned to Bethlehem. The Grotto of the Nativity, in fact, was visited for two years only by the locals. In the last three months, however, the great Basilica has welcomed thousands of pilgrims from every corner of the world.

Today’s Bethlehem lives on tourism, but the perennial political instability of the region and the long closure time due to the Covid 19 pandemic have forced many to close their businesses. In recent months, however, the pandemic situation is improving and the mood of traders, restaurateurs and hoteliers is growing again. When we ask them for a judgment on their work, the answer is more and more often “Nashkur Allah”, [Bene] thank God.

The Way of the Star

At an intersection we take Star Street, the ancient street that, according to Christian tradition, the Holy Family and the Three Kings traveled to reach the place where today stands the Basilica of the Nativity.

A few days ago, the Way of the Star, usually deserted and silent, was celebrating! Some of us arrived in Bethlehem in July and it was the first time we saw so much life in this unfortunately almost uninhabited neighborhood. Lights, stalls, illuminated trees, nativity scenes, bells and minarets alternating, sweets, music, Christians and Muslims eating and celebrating together. In Bethlehem there are more bell towers than minarets, but the emigration of Christians, mainly due to the Israeli occupation, has reduced them today to a minority. But as we tell in the latest episode of our podcast “Voices of the Holy Land”, here Christians and Muslims have a deep-rooted history of brotherhood and solidarity and the fact of hosting the Church of the Nativity of Christ is a source of pride for the whole city.

Before taking you to the Basilica of the Nativity, let us go to greet the Sisters of the Hogar Niño Dios , one of the many works of charity that Pro Terra Sancta supports here in Bethlehem.

After visiting the children and nuns, we take the steep climb that leads to the famous Manger Square, where the town hall is located.

The mayor of Bethlehem is Hanna Hanania and by law she must be a Christian. On the occasion of the lighting of the Christmas tree in the large square on December 3, Hanania wrote in a statement to her fellow citizens the following: “God chose Bethlehem as the place of the Incarnation of the Word, a gift from Heaven for our tormented earth; Christmas is a new beginning full of joy, prayer and hope for a better tomorrow.”.

From Dar al-Majus to the Basilica of the Nativity

If it is true that in Jerusalem the interweaving of different faiths, cultures, confessions and ethnic groups is more evident than in any other city in the Middle East, it is also true that here in Bethlehem there is a large community of Roman Catholics, Greek Orthodox Christians, Greek Catholics, Armenians, Syriac Orthodox, Copts, Lutherans and Muslims.

We pass the olive wood and mother-of-pearl stalls, walk the last stretch of Star Street and reach the Dar al-Majus Community Home . The building is embellished with Christmas decorations and many local and international people stop to photograph the House of the Magi and then enter to visit it.

We climb a few steps outside Dar al-Majus and the white Basilica of the Nativity appears to us in all its splendor. We wait for a group of pilgrims to leave the Basilica and we also enter the smallest entrance portal in the world, the door of Humility (just 130 cm high!). Walls and flooring are covered with mosaics. The wonderful angels with a golden mosaic background indicate the Grotto to pilgrims and, placed along the walls, seem to accompany us.

The star in the Bethlehem Grotto

The veneration for “the Grotto” in which Christ came to light has ancient origins.

The martyr Justin, born in Nablus around 100 AD, wrote that Jesus had been born in a cave near Bethlehem. Also from Bethlehem there will be the ” star that rises from Jacob” (Num 24:17), the descendant of David, the Messiah Jesus Christ. And right in front of the 14-pointed silver star we kneel to pray and sing a very popular song in the time of Advent and that here is perhaps even more heartfelt: From the house of David will rise the Messiah invoked by all / take from a Virgin the body by the power of the Holy Spirit. The Franciscan Father Ananias, custodian of the Grotto, explains that the lamps hanging above the star remain lit day and night.

As every day, in the small altar above us the Armenians sing the Psalms and the Greek Orthodox prepare Mass. Mohammad, Muslim restorer of the Basilica, explains that in the second half of the eighteenth century, the diatribes between Franciscans, Orthodox and Armenians over the ownership of the structure sharpened. For this reason, the Ottoman authorities decided to introduce the status quo that is still in force today. Mohammad tells that, according to a legend, during the Persian invasion of the Holy Land in 614, the Basilica of the Nativity was the only one spared from the destructive mania of the Persians, since they saw on the mosaic of the façade of people dressed like them. The people depicted were the Three Kings.

In 2014, the three Christian Churches collaborated to begin important restoration works that, in the second tranche of work, gave birth to the splendid mosaics that embellish the walls of the church. They are mosaics representing a host of angels, perfectly preserved and so well made that they seem to be moving.

The living stones of Bethlehem

Outside the Basilica, the grandiose Christmas tree with the nativity scene is the backdrop to numerous selfies of Christian and Muslim families. We conclude our tour of Bethlehem at Father Sandro’s Casa del Fanciullo , which we have told you about in this article . In two days it is Christmas and to be here together with the living stones of Bethlehem is a great grace for all of us. We also invite you to be pilgrims to the Holy Land and to visit the place from which salvation history originates.

FROM BETHLEHEM SHINES A LIGHT THAT IS PRICELESS. HELP US SPREAD IT.
Precedente
Successivo