The healing power of a smile for Bethlehem’s elderly 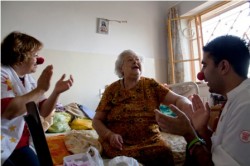 A group of clowns are on a mission to bring smiles to the faces of the elderly population near Bethlehem’s Antonian Society.  Armed with their singing voices, tambourines, bright colours and red noses, the clown therapy group from Bethlehem’s Caritas Baby Hospital truly livened up the afternoon at a local old peoples home.

Following a training course given by professional clowns of the “smile circus” association, the group of doctors and nurses really raised spirits in the rest home.

Residents were singing, clapping along to the music, or simply watching with a smile as they regarded the strange spectacle of doctors who administered smiles instead of traditional medication.

The elderly population of Bethlehemand the difficult situation they find themselves in remains a priority for ATS pro Terra Sancta, as they continue to support the work of the Antonian Society sisters and the Elderly Care Center in Beit Sahour through their project “Bethlehem and elderly people in the Holy Land”.

As for the Smile circus’s motto, we can’t help but to agree: “Laughing is no joking matter”!