“Through the eyes of the Apostles”: the exhibition on Capernaum at the Rimini Meeting 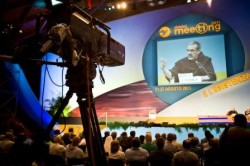 More than ten thousand people attended the session with Father Custos on Wednesday 24 August, on the occasion of the presentation of the exhibition on Capernaum – “Through the eyes of the Apostles – A presence that overwhelms life” at the Rimini Meeting.

The exhibition displays the historical fact of Jesus through the archaeological and evangelical sources on Capernaum, the village on the shore of the Sea of Galilee where he appointed his first disciples and accomplished many miracles. The exhibition, produced with the support of the Custody of the Holy Land, is being carried out through the collaboration of ATS pro Terra Sancta, under the direction of its curator José Miguel Garcia, Professor of New Testament Exegesis at the San Dámaso Faculty of Theology in Madrid.

It will be opened to the public until 27 August.

The Capernaum site was investigated through several archaeological campaigns carried out by the Franciscans of the Custody of the Holy Land during the 19th and 20th century. The excavations led to extraordinary discoveries, testimony to the historical fact of Jesus’ life.

“Still to be seen today in Capernaum are the streets on which Jesus walked, the threshold of Peter’s house. We can understand what life was like for the inhabitants of this time. We can see the kitchens with their ovens, floors, stairs, we can comprehend what the thatched ceilings were like. Among these houses, there is also that of Jesus. We can see it and a few privileged ones can even touch it, there on the shore of the Sea of Galilee. Those inhabitants did not have an emotional or theoretical experience. Jesus was there, in their midst, in their own homes. The events that disrupted their lives took place there, within the very real and ordinary context of their lives, transforming them” (Pierbattista Pizzaballa)

Capernaum represents today a precious Holy Place and an archaeological site of great importance visited by millions of pilgrims. ATS pro Terra Sancta and the Custody of the Holy Land are committed to preserve and enhance the Capernaum site with the “Capernaum, the city of Jesus” project. The project aims to enhance the status of “the town of Jesus” as an archaeological and Biblical site and thus to better bring to bear the spiritual message of this place, which is so special for Christianity.

Bethlehem: a visit to the "Antonian Charitable Society" home for the elderly