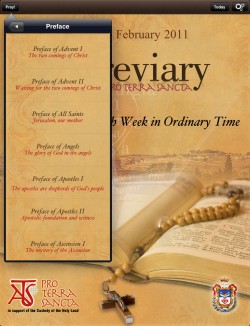 iBreviary TS “Pro Terra Sancta” is the free Catholic application that brings the traditional prayer of the Breviary and all of the texts of the Liturgy to your Windows Phone 7 device! iBreviary “Pro Terra Sancta” seeks to contribute, through a partnership with the Custody of the Holy Land and in collaboration with ATS pro Terra Sancta, to friendship and prayer for all of the Christians who live in the Holy Places.

The application, the first of its kind, offers to all Catholics the possibility of praying by means of the official prayer of the Breviary (Liturgy of the Hours), presenting the appropriate texts on a daily basis. In addition, the application can be used for participating in Mass: it contains all the texts of the readings used during the liturgical celebrations. iBreviary TS “Pro Terra Sancta” also contains all of the principal Catholic prayers and all of the Rituals used by priests and lay people for the celebrations of marriages, funerals, Anointing of the Sick, confessions, etc. In terms of graphical user interface, the application is available in both Italian and English, and it offers the possibility to pray in six different languages: Italian, English, French, Spanish, Romanian and Latin (using the texts of the Vetus Ordo).

The application was the brainchild of the Italian priest Father Paolo Padrini and was brought to fruition by the programmer Roberto De Domenico (application) and the company Netguru s.r.l (database and data sources). It is now being made available through the collaboration with the Custody of the Holy Land and is promoted by the NGO ATS pro Terra Sancta.

In its earlier versions for other devices, iBreviary TS “Pro Terra Sancta” has already been downloaded more than 200,000 times, and it is believed to be the most widely-used application worldwide among Catholic faithful, notably by priests, bishops and prelates at the highest level. It is, moreover, highly valued by the Vatican, now having become a true cultural phenomenon that is generating interest from television and newspapers throughout the world.

The application can be downloaded from Marketplace at the following address:

Official site of the application: www.ibreviary.com

***
The application is continuously being updated: you will be able to send your suggestions and report eventual bugs to the following e-mail address: ibreviary@robertodedomenico.it