Renovation of the Catholic Action cinema in Bethlehem 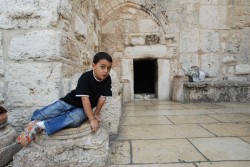 Thanks to the contributions of friends of Italian Catholic Action, the old cinema of Catholic Action in Bethlehem will in a few days reopen to families after having been shut for a number of years.

The cinema was built in 1973 and was closed in 1987 during the first intifada. Since then there have been no recreational places in Bethlehem such as theaters or cinemas. Young children, youth and their families have thus remained up to now without any places in which they can meet and have a good time.

The newly-renovated cinema will offer the possibility for entertainment in which films, theatrical performances and folkloric dances organized by the children of Catholic Action can be viewed. The stage has in fact been widened by 3 meters so that it can now  accommodate theatrical productions.

Italian Catholic Action and the International Forum of Catholic Action have for a number of years expressed their solidarity with the Christians of the Holy Land, and in particular with Bethlehem, through various exchange activities.

The new cinema-theater will become a cultural and recreational center for families and children, in which they will be able to meet each other and enjoy themselves. It will hold up to 370 people.

ATS pro Terra Sancta has been closely monitoring the implementation of the project to renovate the cinema-theater of Catholic Action in Bethlehem. The works are now at an advanced stage, and the project will be completed shortly.

Holy Land Mosaics – A bridge of tesserae across the Mediterranean: the Exhibition displayed in Hebron