Romano Gelmini Association for the peoples of the Holy Land: the first mission of 2012 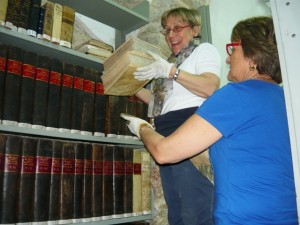 There were eleven volunteers. They arrived between Thursday 26 and Friday 27 April, and they stayed in Jerusalem until 10 May. As soon as they landed they put themselves at the service of the Custodial Technical Office and, in the spirit of the association itself, wasted no time in dedicating themselves to the tasks at hand. In particular inside Saint Saviour’s Monastery and at the Child Mary house for volunteers and pilgrims, where ATS pro Terra Sancta volunteers also stay, as well as those in the international Civil Service for ATS projects.

Some on the mission had specific skills and took part in small maintenance works on the two Franciscan buildings. Others simply lent a hand and their will to be useful: they tidied and cleaned warehouses, and put books into boxes for the transfer of the library to its new home.

Between May and July four more groups of volunteers from the association will arrive in the Holy Land: a total of forty or so people who, bearing all travel expenses themselves, have decided to dedicate two weeks of their time to supporting the work of the Franciscans, who have for centuries taken care of Christian sacred places and the living stones that inhabit them.

The Romano Gelmini Association for the peoples of the Holy Land was founded in 2005 and has already organised 37 missions, bringing more than 100 volunteers to the Holy Land.