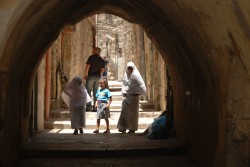 The following paragraphs contain tales of families and elderly members of Bethlehem’s community.  The Franciscan Social Service Office are committed to providing care for these people on a daily basis helped by the support of ATS pro Terra Sancta and their two projects dedicated to the birthplace of Jesus Christ: “Bethlehem and the children of the Holy Land” and “Bethlehem and the elderly of the Holy Land”.  This support is of the utmost importance and is necessary for the survival of those who live under this Palestinian system, where there is no public or social aid available.

Every day, many needy families and especially elderly people who are on their own are turning to the social assistance provided by the parish.  In their state of abject poverty and loneliness they are looking for support.  These people have no one to turn to, no one who will listen to them and help them and often, cannot afford life-saving medication that they may need.

The Youth of Bethlehem

S is a young mother with two sons.  Her family is extremely poor, her husband works as and when he can find odd jobs and is the only source of income for the family.

S is seriously ill, having suffered a heart attack and being diagnosed with cancer.

She lives with her family in an impoverished house in Bethlehem, not too far from the Church of the Nativity.  Given the seriousness of her deteriorating health and the precariousness of the Palestinian healthcare system, she was able to receive treatment in a private hospital.  S’s family was not able to pay for her treatment, which amounted to the equivalent of around 2000 euros.  S turned to the FSSO for financial aid and they were able to negotiate payment for her treatment with the public healthcare system.

E is a single woman

E is a single woman, a widow with three sons who live abroad, two of whom are studying.  She is alert, intelligent, educated and speaks very good English.  She has always had a good job but now, due to the lack of a decent pension system, she finds herself with nothing, old, in bad health and alone.  As she has no income, she survives solely on the money that her sons send every now and then.  She lives in extremely poor and humid conditions that aggravate her problems with rheumatism.  E doesn’t have the money to pay for medicines that would keep her alive, let alone money to spend on renovating her home.

A while ago, E turned to the FSSO for help and support, and the office now covers the cost of her life-saving medication.

M is strong, but not strong enough…

M is in her seventies yet still remains very active despite the troubles that life has thrown at her.  She is a widow after losing her husband many years ago.  Together they had four sons, one of whom was killed in America during a shoot-out, the circumstances of which have never fully been clarified.  Another two of their sons also live in America, yet M hasn’t heard from one of these two in years.  Their daughter, who is doing well and has her own family, sends M 200-300 dollars every few months.  This money just about allows M to pay her rent but she doesn’t live alone, she also has a mentally ill son to take care of.

After failing to meet the costs of her rent, electricity and water bills, M turned to FSSO for help, seeing as she has no one left here.