The Grotto of Bethlehem and St. Francis’ love of Christmas in the words of Pope Benedict XVI - Pro Terra Sancta
Uncategorized

The Grotto of Bethlehem and St. Francis’ love of Christmas in the words of Pope Benedict XVI 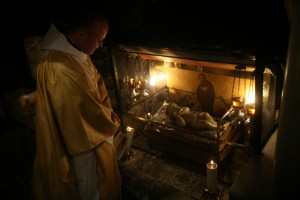 The words of Pope Benedict XVI on Christmas Eve take us back to Bethlehem, to that cave in which the infant Jesus was born, and also remind us of the importance that the feast of Christmas held for St. Francis of Assisi. It was he in fact who established the tradition of the crèche, in an effort to portray the conditions of poverty and simplicity in which God chose to make himself little, to make himself an infant, to allow humanity to come to him. We present here several passages from the Christmas Eve Homily delivered by Pope Benedict XVI in St. Peter’s Basilica.

“Christmas is an epiphany – the appearing of God and of his great light in a child that is born for us. Born in a stable in Bethlehem, not in the palaces of kings. In 1223, when Saint Francis of Assisi celebrated Christmas in Greccio with an ox and an ass and a manger full of hay, a new dimension of the mystery of Christmas came to light. Saint Francis of Assisi called Christmas “the feast of feasts” – above all other feasts – and he celebrated it with “unutterable devotion” (2 Celano 199; Fonti Francescane, 787).”

“Today Christmas has become a commercial celebration, whose bright lights hide the mystery of God’s humility, which in turn calls us to humility and simplicity. Let us ask the Lord to help us see through the superficial glitter of this season, and to discover behind it the child in the stable in Bethlehem, so as to find true joy and true light.”

“Let us allow ourselves to be made simple by the God who reveals himself to the simple of heart. And let us also pray especially at this hour for all who have to celebrate Christmas in poverty, in suffering, as migrants, that a ray of God’s kindness may shine upon them, that they – and we – may be touched by the kindness that God chose to bring into the world through the birth of his Son in a stable.”