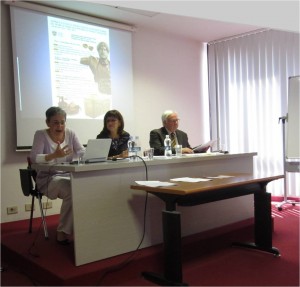 On 6 June of this year the Department of Humanities of the University of Rome “Tor Vergata” organized the last – the first of the summer break – of the Ph.D. Research meetings on Classical Antiquities and their Riches: Archaeology, Philology, History. As part of the Study Day entitled “Israel in Ancient Times: New Research on History, Archaeology and Epigraphy”, the Proceedings of the Conference held at Isernia (Italy) on 6 April 2011 on “From the kingdom of Judah to the province of Syria Palaestina. Archaeology in the Holy Land”, edited by Fulvia Ciliberto, were presented.

The day devoted to Isernia and its proceedings had the objective of showing the possibilities, in terms of studying and enhancing the Archaeological Heritage of the Custody of the Holy Land, offered by the project initiated by ATS pro Terra Sancta in 2009 for inventorying and computerized cataloguing of the heritage of the Archaeological Museum of the Studium Biblicum Franciscanum. This point was stressed by Margherita Bonanno, Professor of Archaeology of Roman Provinces at Tor Vergata, in her presentation: “This is of great importance because it represents an Italian contribution to the study of the reality on the ground, of the historical-artistic heritage of these very interesting territories” and because it will help to give “a new impulse to the enhancement of the heritage managed by the Custody in the Holy Land”.

The Proceedings, presented in the series Museum of the Studium Biblicum Franciscanum thanks to the support of its Director Father Eugenio Alliata ofm, gather together the contributions of: Elisabetta Bruno (COPAT Italia-Beni Culturali, Turin) on the computerized technologies utilized in the cataloguing project; Fulvia Ciliberto and Cecilia Ricci (University of Molise), who have re-read a fragment of a garland sarcophagus with inscribed tablet; and Daniela Massara (University of Milan) who has demonstrated how through the recovery of ancient data and archives it is possible to restore the original context to a number of mosaic fragments preserved at the Lapidarium of the Flagellation.