Visit to the Museum of the Studium Biblicum Franciscanum 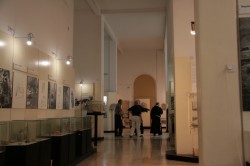 Also during the Holy Week (until Wednesday) you can visit the Museum of the Studium Biblicum Franciscanum, founded in 1902 as the first museum in Jerusalem and recently reopened to visitors.

The Museum of the  Studium Biblicum Franciscanum is an archaeological museum and presents priceless findings from the excavations carried out by the fathers of the SBF all over the Holy Land since the beginning of the XX century.

The museum is located in Old Jerusalem, next to the Flagellation station, at the beginning of Via Dolorosa. It is open all year long, from Tuesday to Saturday, from 9 a.m. to 1 p.m. and from 2 p.m. to 4 p.m, while during the Holy Week, with the Easter celebrations, it is open with the same timetable from Monday to Wednesday.

ATS pro Terra Sancta has been supporting the Museum of the SBF for some time now with the project  “About the Holy Land” , with the ultimate aim to build a modern Christian museum centre in Jerusalem, an integrated work of communication and cultural production, for pilgrims, tourists and scholars coming to the Holy Land, but also for the local population. It shall be a museum about the history of the Christians in the Holy Land – through guided tours with facilities – and the historical experience of the Custody in fulfilling its mandate to preserve the traces of the presence of Christ and the first Christians in the Holy Land.